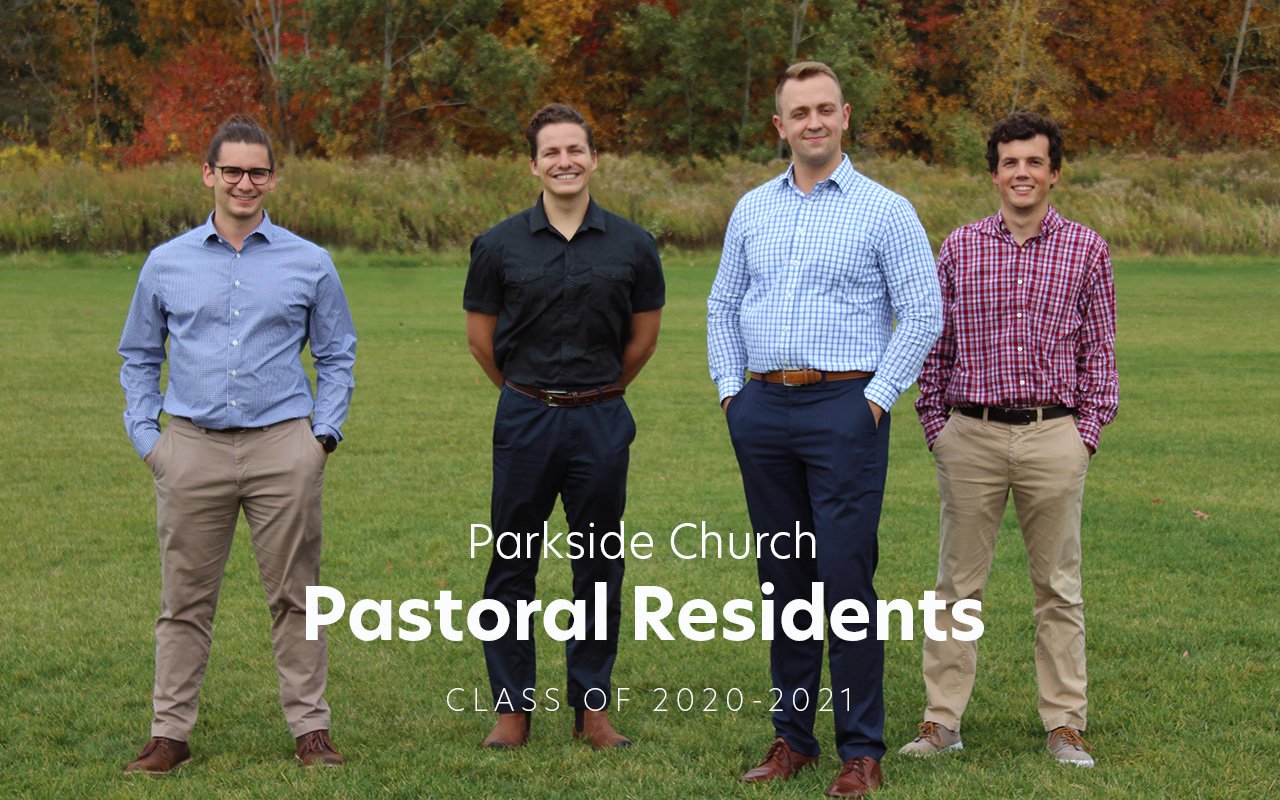 Beginning a new job in a new city during a pandemic can be overwhelming, but for Parkside’s four new residents, it has allowed them an inside look at how a church operates amid unexpected challenges and changes. “When we began in August, all the ministries were starting up and trying to figure out how the church was going to do that with COVID precautions,” Peter Lindia said. “It was good to get to watch and see how they were making decisions.”

The precautions have made it difficult to get acquainted though. “As far as ministry right now, it has limited our ability to together and be comfortable with each other. There’s always potential worries or scares there,” said Zachary Mashburn. Regardless, each resident is finding his place.

Joel hails from Belle Vernon, Pennsylvania, just 45 minutes south of Pittsburgh. While attending Grove City College and majoring in biblical and religious studies, Joel also played college baseball. “I’ve played baseball my entire life, so it’s weird not having it now,” he said. Now Joel spends his free time doing any type of competitive games, whether they are outdoors like volleyball or frisbee, or indoors with board games such as Ticket to Ride or Catan. Joel has always sought to become a pastor and plans to attend seminary when the residency is over. “This year is a good year to see what a church looks like from the inside and how it functions. I will have ministry experience, which will help make my seminary experience more practical and relevant.”

For Peter, jumping into high school ministry on his first rotation has been eye-opening. “Growing up, I didn’t have the best experience in youth group, but building friendships and relationships with the students now has been such a redeeming experience.” Peter first heard about the residency from former Parkside student Jack Brown, who encouraged him to meet with the pastors who came to Wheaton College to recruit prospective residents. Being from Durham, North Carolina, Peter connected easily with Dan Southam, an alumnus of Duke University in Durham, and has enjoyed getting to know the rest of the pastoral team. With a degree in Christian Formation and Ministry, Peter enjoys talking about what it looks like for people to grow in their faith in various stages of life.

Sergey (pronounced like “surge”) is the only married resident of the group. He and his wife, Yanna, have been married for two years, live in Strongsville, and became members of Parkside a few years ago. Prior to the residency, Sergey owned his own business, which he sold to be able to dedicate this year to discerning whether he was called to full-time ministry. When not working out at the gym, Sergey enjoys any type of spicy food—spicy wings, spicy chicken, etc. “I put sriracha on everything,” he said. Having been born to Ukrainian parents, Sergey also enjoys a good traditional dish like pierogis.

Zachary (Zach) has traveled the farthest to get to Cleveland, having grown up in Lake Arrowhead, California and spending his college years at Moody Bible Institute in Chicago. In school, Zach studied theology and planned to go into ministry. During a summer internship, Zach met former Parkside Church student Noah Senthil, who told him about the residency program. “I was looking for something to bridge the gap between coming right out of school while still pursuing ministry. This was a great fit.” In his free time, you can find Zach checking out the local coffee shops or adventuring outdoors.

All four of the residents are hoping for the same thing this year: clarity. As each one observes and performs specific ministry duties throughout a broad range of ministry environments, they also hope this experience will help them to evaluate God’s call for full-time service on their lives. “I’m fearful of getting into pastoral ministry and not being called to it. There are a lot of guys who have been pastors for 20 years who then renounce their faith. I don’t want to be one of them,” Sergey said. Zach added, “We will be held responsible for the shepherding of God’s people. Am I capable of that?”

Over this next year, the pastoral team will work closely with each resident to help discern their character, call, competence, and convictions. Joel, Peter, Sergey, and Zach would value your prayers to that end.