Building Connections Through English and Coffee 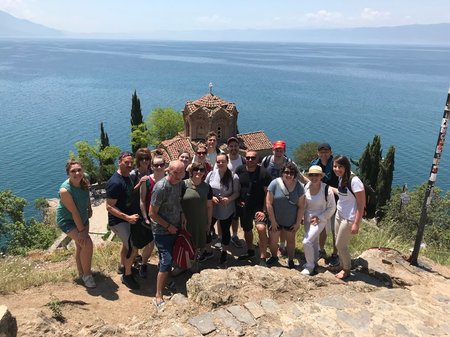 A Short-Term Mission to Macedonia

Forty-two hours of travel isn’t the most ideal way to begin a ten-day long missions trip. On June 7, with three plane rides and a 12-hour layover in another European country in their sights, the Parkside team set off. Comprised of various ages, occupations, and stages of life, they were brought together by one common goal: the desire to make Christ known in a country that desperately needed Him.

The team of young adults were headed to Skopje (SKOP-ee-ya), Macedonia, to teach English to the people there. Only three had experienced teaching a class before, and one of those was a pastor! The anticipation of what was to come brought many worries and questions from the rest. What would teaching the class look like? Would anyone even be willing to meet with them? Would they be able to share the gospel, and how would they do it?

“I prayed to be able to connect with strangers,” said team member and English teacher, Karly Smith. “Being in Macedonia meant relying on God’s strength and not mine.” The rest of the group agreed. As they arrived and began their work, a unity formed around the importance of building relationships with people.

Each morning, team members had devotions with Mike and Cindy, Parkside missionaries living and working in Skopje. Mike and Cindy run a language center called Let’s Talk, located within the city limits. They see the importance of being able to communicate with others through the art of conversation, while simultaneously building relationships that will, hopefully, lead to sharing the gospel.

With that in mind, the team spent their afternoons planning lessons, breaking to have lunch together, and then resuming work in preparation for each evening’s English class. With the uncertainty of how the classes would go and the desire to make connections with the students, prayer was an essential part of the process.

The team spent a lot of their time with the students, both in class and outside of class. They would get coffee at night, and during the day, a student would show a few of the team members around the city. This was a testament to the Macedonians’ hospitality. They were eager to take time out of their day to walk for hours in 90-degree weather just to be able to spend time with people they hardly knew.

Because Macedonians are a late-night culture, Skopje is a city that comes alive at night. Most coffee shops and restaurants don’t close until one in the morning. These evening hours provided time to meet with the students after class, allowing for continued conversations about life, work, family, and faith. “The relationships aren’t rushed here, we’re just hanging out and getting to know each other. In America we’re always rushing; in Macedonia they’re taking time for other people,” said Eric Pollitz, team lead and a pastor at Parkside Church.

Through their efforts, the team learned that missions isn’t always project-based. In fact, it’s often relational. In order to build relationships, one must first know how to communicate. For the team, teaching English was just the first step to deeper and more meaningful conversations.

At the end of the week, the team went to a Macedonian church where Eric preached on a passage in Mark 10. He spoke on what true greatness looked like. In the eyes of Jesus, true greatness comes from serving, in putting others’ desires above one’s own. To follow Jesus means that people must be servants. “For even the Son of Man came not to be served but to serve, and to give his life as a ransom for many (Mark 10:45, ESV).”

“We realized that the Macedonian students had embodied this truth by giving up their time and energy for people that they didn’t even know all that well,” said student and team member Liz Caldwell. “It was humbling, because we had been the ones to travel there and teach, and we realized that our biggest lesson was the example that they had set for us.”

This new understanding brought additional revelations about work, life, and service. They realized that not only did their disparate occupations, stages of life, and interests benefit them, but that the Lord was able to use each of their talents in different ways for His purposes. “[As a team], we were all so different, even within our own circles, and that’s good. A group like this shouldn’t be together, but we had more things in common than we thought because we have Christ as our Savior,” said Robby Lacey.

A Call to Service

As the team traveled back to the United States, they held onto the lessons the Macedonians had taught them. “Regular life comes back, which is hard,” said Moriah Wright. “This time of settling back in can be used to trust in the Lord. I’ve realized that even in going back home, it’s still a mission.” Being intentional about building relationships isn’t just a foreign idea; it can happen within our own neighborhoods and within our churches.

God calls each person to missions, no matter who they are or what area of life they are in. If we are followers of Christ, we’re called to share the gospel with others wherever we are. While you don’t have to travel across the world to work in missions, if you’re interested in a short-term trip with Parkside, we have a medical missions trip to India coming up. For those interested in learning more, there will be a meeting on June 30, at 11:15am, in Room A219.

To view more pictures from the Macedonia trip, click here >